THE WAY PAPER IS MOVING... 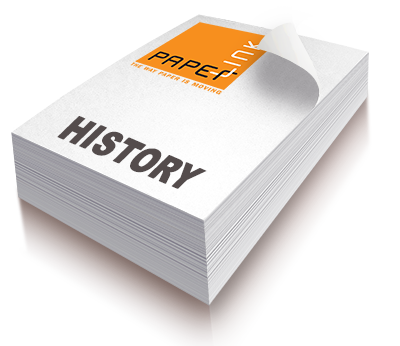 Both VRG and Main Paper, owned by Mondi, had continued to trade under their respective company names. Between 1987 and 1993 several changes had taken place. To save warehousing costs, both companies operated from the same warehouse although each had their own stocks and branded line items.

The sales forces were still separate and housed in separate buildings, and on many occasions even competed against each other for the same orders. By 1993, it was clear that the current situation could not go on and the two companies were formally merged to create the paper merchanting giant that is today known as PAPERLINK.

During December 2000 further changes took place, aimed at meeting specific customer needs in a rapidly changing industry. Paperlink, although a separate paper merchant within the Mondi group, was formally incorporated into Mondi Paper as the division’s fifth business unit.

New technology, and in particular SAP, has brought and will continue to bring, numerous benefits. Further innovations aimed at improving customer service levels are continually being rolled out.

Paperlink today is determined to be the paper supplier of choice and aims to address the needs of its customers. Paperlink differentiates itself from its competitors with an unbeatable service and core product offering.

There are exciting times ahead for leading South African paper merchant, Paperlink, after a restructuring process which has brought in fresh energy and a new management team focused on customer service and adding value.

Paperlink is a division of Mondi Ltd. and one of South Africa’s leading paper merchants with a footprint across South Africa. The company supplies Rotatrim office paper and commercial printing papers to customers around the country.

The company has third party partners who provide warehouse and distribution management services, allowing the Paperlink team to focus on customers.